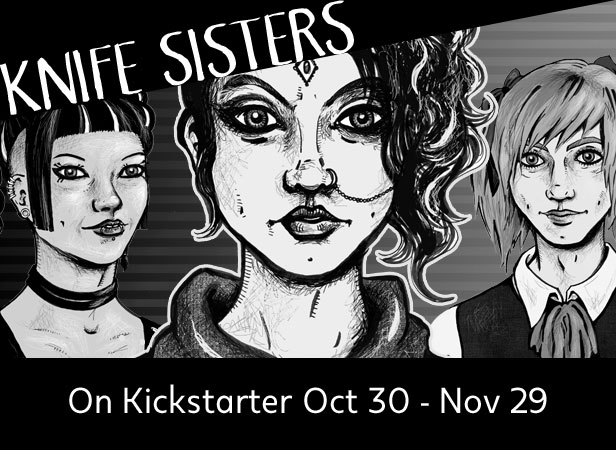 In november 2018 I did a Kickstarter campaign for the visual novel I’m working on, Knife Sisters. This was in part an impulse move, which I will get back to, and it was instigated by meeting a representative from Kickstarter at IndieCade in L.A. in October, who told me he thought the project could do well there. But it was also because I had the idea of doing a printed tarot deck for the game, and for that I would need some more funding. Those two things made me decide to give it a go. 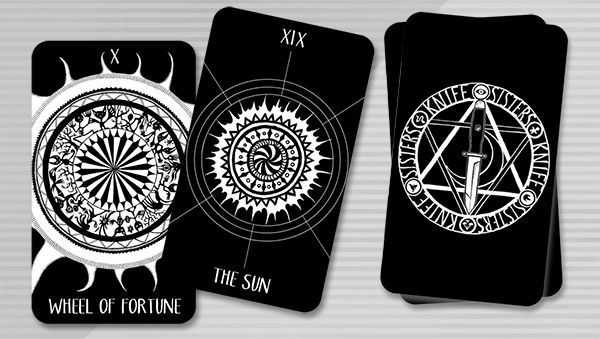 The tarot cards of my dreams

To be able to keep the deadline of releasing the game in spring 2019, I soon understood I had to do the campaign pretty much straight away. The tarot cards would be part of the game, and I needed time to implement them, after a potentially successful campaign. Doing a campaign in December wasn’t an option, and in January it would be too late, so I decided to go in November.

The campaign was launched on October 30, just about 2.5 weeks from when I decided to do it. This, my friends, was not a well thought through decision.

The campaign was successful, but not until the very last days, and it brought me a lot of headaches, stomach-aches and also many surprises. Below I’ll go through what I learned, and what I think is important to know and do before launching a campaign. Some of these things I managed to do well, some not that well, and some of them I didn’t do at all, but wish I had.

0. Don’t do a campaign on impulse

So, there, I said it. Just don’t do it! Crowdfunding campaigns are too complex to be done on impulse. You’ll see why below.

And then I really, really mean: DO YOUR RESEARCH! I didn’t do enough. Partly because I had been part of two successful campaigns previously, so I thought I already had some insight into the workings of Kickstarter. But those campaigns were for other types of projects, and they were done in 2012 and 2015 – and since then, a lot has changed.

I did look into some campaigns for other visual novels before starting my own, but I didn’t do it enough. I did the mistake of looking mainly at successful campaigns, when I should have been (also) looking at those who didn’t succeed. If I had done that, I would have known to set my funding goal a little lower. Here are some interesting statistics about visual novels on Kickstarter, and here are some about games in general. The lesson learned is that it’s important to know the difference between different kinds of projects. 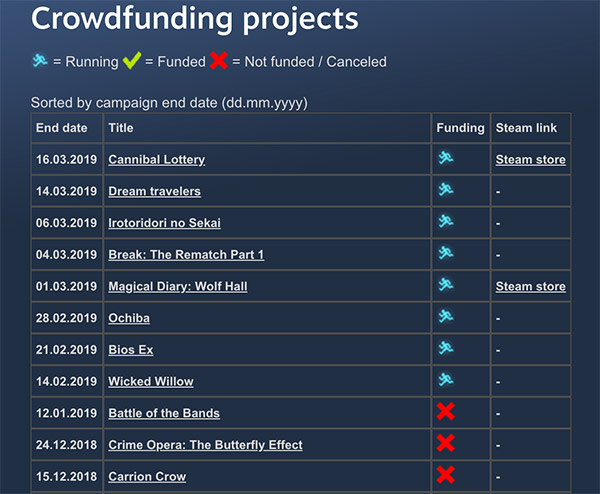 I’m not a forum person, but I should have forced myself to become active in the forums surrounding VN:s before starting the campaign, because just hanging out there made me learn a lot about campaigns for this specific medium. I started taking part in them only after I’d already launched – and at that point it was too late to change anything.

2. Plan as much as possible ahead

This I knew from having taken part in campaigns before. When doing the campaign for Words of Oz, me and my then business partner planned almost all of the content for the updates ahead, and I repeated that process for this campaign. I planned to update every third day, and this worked out well. I was generally pleased with the campaign page and everything around it – here I think my experiences from previous campaigns paid off.

The reason to plan updates, as well as all the other marketing and communication content and actions, in advance is that when the campaign launches, you will be completely absorbed by just doing everything (for example writing messages to everyone you know), and then doing creative things, such as creating interesting content, can be overwhelming.

With only 2.5 weeks between decision and realization, I had no time to market the campaign in advance. This was a mistake, and showed that I relied too much upon how Kickstarter had been working in the past. In 2012, pretty much the golden age of crowdfunding, you could do a campaign without marketing it in advance. You could also do a campaign without already having an audience. This is much harder today, and from what I know now, I wouldn’t recommend it. You need to have at least 2-3 months to market the project and the campaign beforehand.

If I would have done that, the hurdles I ran into while trying to market the campaign on Facebook, Instagram and Twitter (read more about that here) wouldn’t have come as a surprise. I did only try to buy ads for the campaign when the campaign had already started, and it turned out to be impossible, since the game includes adult content. This kind of game needs to be marketed differently, something I had too little knowledge about. Not being able to buy ads on social media I think affected the outreach of the project quite a bit, and if I had taken that into consideration, I might have lowered the funding goal. 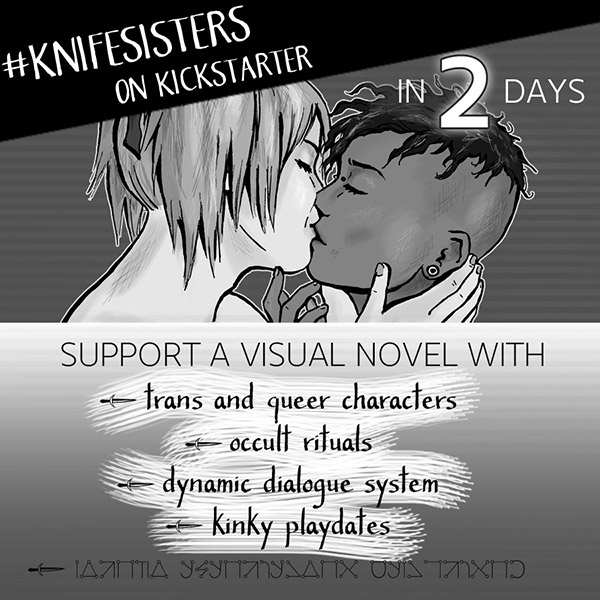 I should also have contacted the press beforehand, trying to make sure to get some coverage. I put too little time into communicating with the press, both before and during the campaign, relying too much on social media, which I in the end couldn’t use as I’d expected.

One thing I worked really hard on before launching was the rewards and the whole look and feel of the campaign. I was happy with the content, and we had some really nice rewards, especially the physical tarot deck, but they proved to be too expensive. People told me afterwards that they really wanted the tarot deck, but couldn’t afford it. I should have asked for feedback on the reward tiers before launching. Once again, this can’t be done if you’re in too much stress to launch, which I obviously was.

Last, but not least: team up with someone that can help out with some of the actions that have to be done during the campaign. It’s very stressful to do all of it by yourself, especially if the campaign is not working out as intended. Share the work and the worries with someone, not least if it’s your first campaign. I did have help with some tasks, such as shooting the video, and I definitely had some good support from team members and people in my network, but if I’d go again, I’d try to share the workload even more. 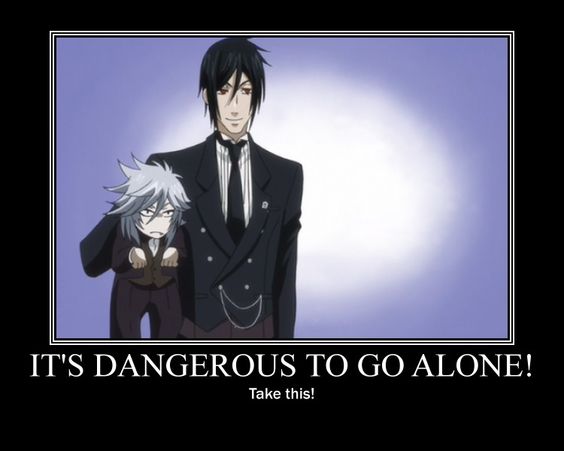 Looking back, I still don’t regret doing it.

In the end, the campaign succeeded, despite me making some mistakes. The project has definitely benefited from everything that happened, and I learned many things that will be valuable when the game launches. The project reached new people and got some well-needed attention. But if I would do it again, I’d do a lot of things differently … and I’m not sure I ever will, because of how stressful it is. 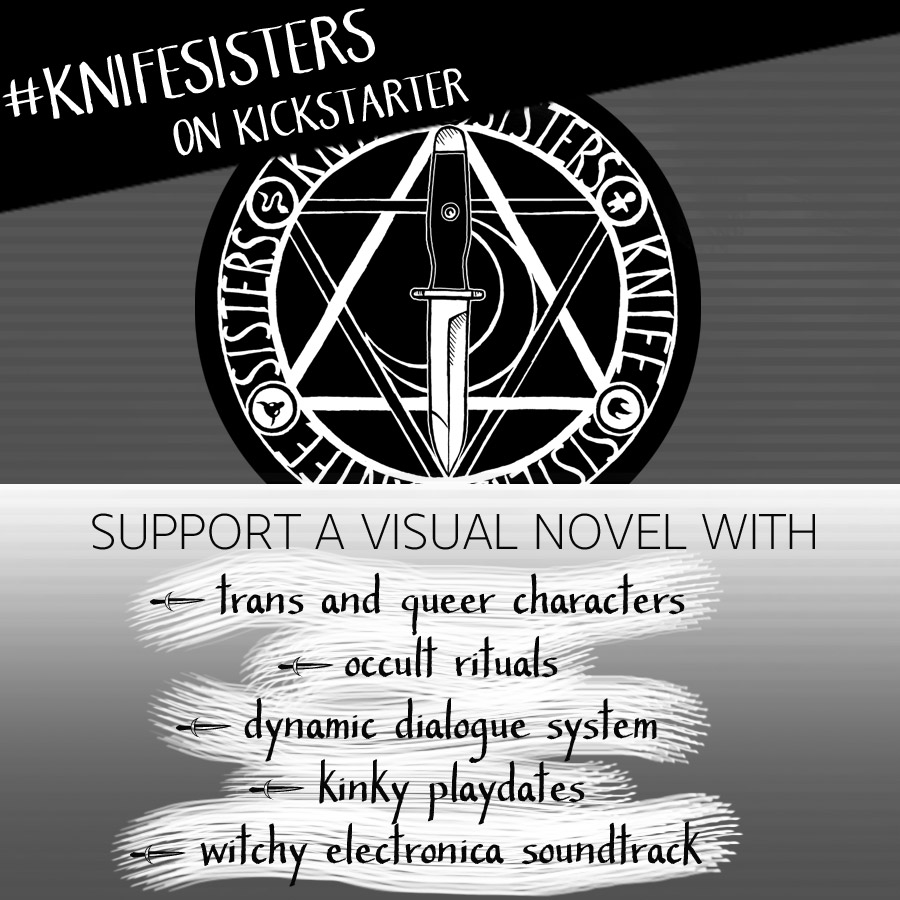 The Kickstarter campaign for Knife Sisters is live!!! Check it out to pre-order the game at a lower price, get unique merch and more! 💥