Leo, a 19-year old non-binary transperson, wakes up late after a rough night with a pounding headache and no recollection whatsoever of the night before, but with a sense that something really bad might have happened. It’s now up to you to go back in time and explore what triggered the events that night.

The person that has pulled Leo into this situation is the artist Dagger, who six weeks earlier moved into the same commune as Leo. She claims to be part of the secret society Knife Sisters, and she draws Leo into a world of rituals and strange assignments, asking Leo to do things that get more demanding each time. But can Leo really do whatever Dagger says, regardless of the cost? 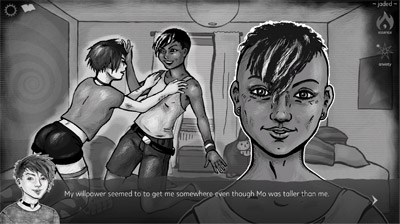